My name is Greg Davis and I collect Idaho nationals and deal in all Federally issued currency.  My web site on old money is here: http://www.AntiqueBanknotes.com

This is collecting story that I just recently lived through and thought it might be interesting to other collectors out there waiting to get a chance at a tough bank.

About two months ago a lady contacted me about a Hailey, Idaho small sized note. Hailey is my must have charter as my whole family was from there and my great grandfather was named Hail after the town.

Anyway,  it turns out that her grandfather was the cashier at the bank which was next to mygreat grandfathers barber shop.  So,  she sends me scans and eventually I buy the note.  So I am happy...

Not more than two days later, I see on eBay another Hailey Idaho note from the same bank and this one is a large sized note.  It is also a pretty example.  So I bide my time and eventually win that note too...

I speak to the owner of the eBayed large sized note and it turns out it was owned by A. W. Ensign.  who just passed away.  So, we have two bank notes from two recently passed bank officers and both have found me.  How lucky am I?

Now, the first seller tells me she has a picture of her grandfather in the bank and asks if I would like to see it.  Obviously I say yes and she sends me the picture I have attached... her grandfather was OE Thamm, the young guy at the left in this picture.  The old guy in the cashier cage has to be Ensign.  I can't be sure but mathematically it works and there are few other choices.  I am waiting for confirmation. 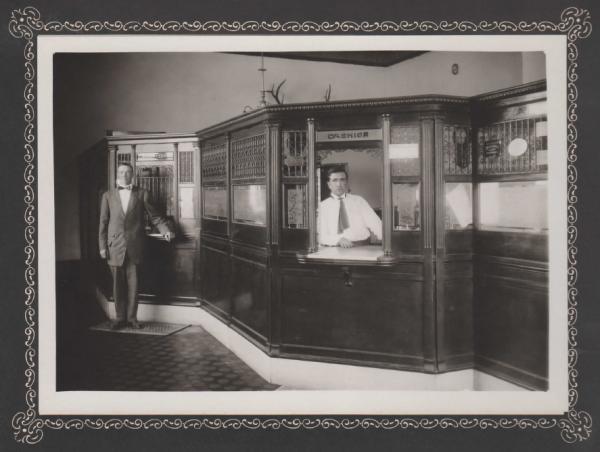