Pierre Fricke and Fred Reed announce the publication of History of Collecting Confederate States of America Paper Money – Volume 1, 1865 to 1945. With 340 pages of well-illustrated stories and history, this book is a must for anyone interested in collecting Confederate paper money, Southern history, or coin and paper money collecting. Fricke and Reed begin with a brief history of the Confederate financing during the Civil War and proceed through the decades highlighting the major and typical books, periodicals, price guides, auctions, collectors and dealers of the various eras since 1865. Appendices feature Smithsonian curator Richard Doty on the history of the famous Richmond hoard of Confederate money captured by the Union at the end of the War and an easy-to-use pictorial guide to getting started collecting the types of Confederate money. Additional coverage featured on a DVD includes research materials, collecting aids such as checklists, condition census of rare Confederate notes (updated from the 2005 "Big Book"), and an extended presentation of the material in this and forth-coming Volume 2 (1945-2015).

“I salute Pierre and Fred for producing a book having a unique theme about a long-neglected, but very important and interesting aspect of collecting Confederate currency. The novice, the seasoned collector, or astute investor should find information in this book invaluable…The book is well researched and gives a wonderful history of various collections, the collectors who investigated the mysteries of many of the notes, and discussion and emphasis on early catalogs and sales. As such, it should interest anyone having an appreciation for the history of collecting, and desire to collect Confederate currency. In addition, it may also give valuable insight as to what the future of collecting may be.” Marvin Ashmore, longtime collector of Confederate and Southern items.

What You Will Learn and Find
•Easy-to-use picture guide to types of Confederate paper money
•Introduction to Confederate finance
•Who were the major collectors, dealers, auction houses of 1865 – 1945
•What did major and typical collections look like
•What were the major books, price lists and periodicals of the period
•Price history of types and varieties of Confederate money
•Research materials including old auction catalogs and lists - DVD
•Checklists to guide the collector - DVD
•Numerous articles - DVD
•Presentation of the History of Collecting Confederate Money 1865-date - DVD
•Condition census of rare Confederate notes; Montgomery, T-27, T-35 census - DVD 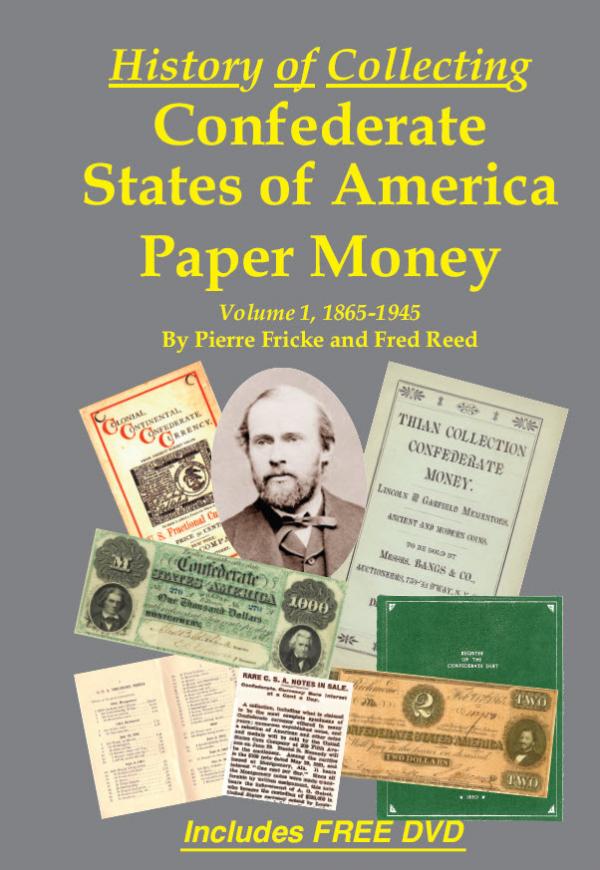