Fractional Currency has enjoyed an increased popularity over the past few years.  Most collectors have some exposure and knowledge of it, however, very few collectors, other than those with advanced knowledge, know of the coins that were minted to redeem postage and fractional currency.

Fractional currency was issued between 1862 and 1876 in five separate issues in denominations of three, five, ten, fifteen, twenty-five and fifty cents.  It was printed to relieve the severe shortage of small change that came about due to people hoarding coins because of their fear of the stability of the government and its' paper money during the Civil War.  "Postage currency coins" were minted to provide a redemption system for fractional currency with the intent to legitimize it by giving it a more solid backing.  Mint director James Pollock in a report to Congress on October 27, 1862, proposed a new coinage to ease the shortage of small change, one that would not be hoarded for its' bullion value.  He proposed that these coins have a reduced weight, but retain the 9/10th fineness of the current coins as "the people are always jealous of any reduction in quality."   He felt that these coins would be accepted by the public as the then current intrinsic value of a penny was less than 1/24th of a cent and they were widely accepted and used by the general public.  He questioned, "would the half-dime, dime or quarter dollar be any less acceptable if it were, say, 3/4 their present weight?"  However, he never followed through on his idea and it was never implemented.  His idea was resurrected when in a May 15, 1863 report to Director Pollock, Mint Assayers Jacob R. Eckfeldt and William E. DuBois recommended the use of this lower weight coinage for the redemption of fractional currency.  They proposed that the dime be decreased in weight from 38.4 grains to 20 or 22 grains and that the quarter dollar be reduced from 96 grains to 50 or 55 grains.  They further proposed experimenting with a new metal, Aluminum.  They felt that a dime of the same composition and diameter, but half the thickness (to account for the weight reduction) would be unacceptable due to their fragility and possible bending.  They proposed using Aluminum instead of Copper as the alloying metal as it could give more bulk to the coins for less cost.  Two grains of Aluminum would give the same bulk as seven grains of Copper.  They embarked on this experimental minting in total secrecy due to Secretary of the Treasury, Salmon Chase responding unfavorably to their initial proposal.

The first Postage Currency pattern pieces were struck on May 19, 1863.  The obverse had a shield in the center and engraving around the edge reading "EXCHANGED FOR U.S. NOTES."  The reverse had engraving reading "POSTAGE CURRENCY--ACT JULY 1862"  on the edge and "10--CENTS--1863" in three lines in the center.  The exact number of specimens minted are difficult to ascertain, possibly due to the secrecy of the experiment resulting in less than precise records being kept.  One source reports that on that first day, 43 dimes in the standard silver composition on 22-23 grain planchets were struck.  Although, two were struck on 20 grain planchets, these were found to be substandard. The next day, May 20, 1963, 30 dimes in Aluminum and 39 in pure tin were struck.  Then, on the next Wednesday, 15 in tin with 3% Copper; 30 in Aluminum with 3% Silver and 27 in 75% Copper and 25% Silver were minted.  There were also four varieties minted with a seated liberty design on the obverse like the other coins of the time and with a reverse like the initial coins.  Finally, there were four varieties minted in 1868-9 with the shield obverse and the reverse like the seated liberty coins, but with center engraving on three lines reading "ONE--DIME--1868."  These were probably minted solely for sale to collectors, like other famous coins, since pattern coins and sets were very popular with collectors, easy to sell and a good source of revenue for the mint.  No one knows the real reason the issue never progressed past the pattern stage and was fully implemented.  The attempt may have been abandoned as most specimens exhibit die cracks, are buckled and have split planchets indicating that they would probably have been very difficult if not totally unacceptable to produce and use on a mass scale.  It also could have been that the finished product simply failed to impress the Treasury department officials as they had already responded unfavorably to the initial idea.  Also, fractional currency was cheap to produce and was generally well accepted, so the need for the coins was just not there.  Whatever the reason, these "Postage Currency Coins" are very intriguing. 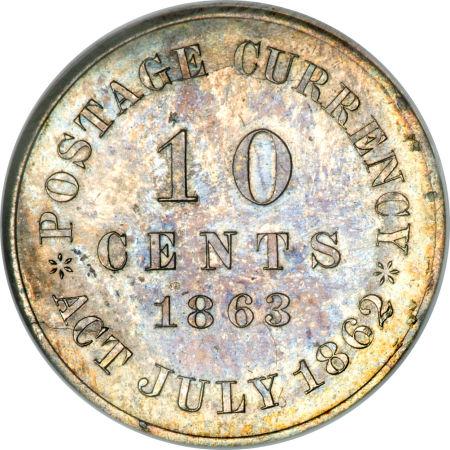